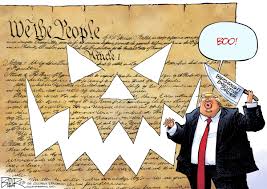 The Cartoon I chose relates to President Trump attempting to adjust the fourteenth amendment and therefore eliminate the birthright executive order.  The cartoon portrays a crudely drawn Trump cutting up the constitution with a knife that reads “birthright executive order”. The constitution is cut into a jack o lantern face, which could indicate not only the closeness to halloween, but also how this extreme measure is frightening to many people. The article “In Campaign’s Homestretch, Trump Tosses out ideas to See What Sticks” relates to this cartoon, as it describes the new policy measures Trump has discussed.

The article itself describes how president Trump has decided to amend the constitution in a way that prevents children of immigrants from becoming citizens, even if they were born in the United States. The article states that in the final days before the midterm election, Trump has been throwing random policies to “see what sticks”. Other republican leaders are not sure what to make of these drastic proposals.

Examining this political cartoon next to the article helps to better illuminate the understanding of global issues and engagement. First off, creative texts are more visual, and often use metaphors that resonate with its audience to help create a better sense of understanding of the issue. Secondly, the cartoons show the bias of the author which can help illuminate the views of some people regarding the global issue at hand.

Political Cartoons engage the audience in different ways than articles do. Written articles offer more detailed information, and often incorporate quotes and viewpoints from different individuals. Cartoons however, are more biased as they only include the viewpoint of the author. As previously mentioned, Cartoons are often easier to engage the audience because many times they include metaphors which make the political issue easier to resonate with and understand(for example, the halloween metaphor in the cartoon I chose). Although there are differences in the ways that these texts engage the audience, both forms provide their own understanding of global issues.

The article “Will There be a Ban on Killer Robots ” by Adam Satariano addresses the future of autonomous weapons and the potential threats involved. This article is relevant to the future of conflict security because it talks about the future advancements in the use of lethal autonomous weapons in a military manner. Technology such as autonomous missiles have led military leaders to think more carefully about the possibility of warfare with less human involvement in the future. Humans rights groups and world diplomats have also considered these possibilities too, and have urged the UN to address this in treaties.twenty six countries have called for a ban that requires human involvement in war, but several influential countries have declined.Diplomats and the United Nations have been unable to reach an agreement on this technology development. Defense controllers on the other hand, are excited to see how this technology is developing. Research continues on this topic to try to get a better understanding of these types of technology.

This article is significant because as technology advances, the possibilities of lethal autonomous weapons and killer robots become more likely to eventually happen. It is important for scientists to understand the real implications that this technology may have on human security. If technology is to advance faster than humans can understand it, killer robots could become a real danger and threat to the world.

Satarino, Adam. “Will There be a Ban on Killer Robots.”The New York Times, 19 Oct. 2018, https://www.nytimes.com/2018/10/19/technology/artificial-intelligence-weapons.html

The article “China-US Ties Sinking Amid Acrimony Over Trade, Politics” describes the clashing viewpoints of China and the United States. This is relevant to nationalism because it shows how nationalism can divide people, as many countries see themselves as separate from others. This makes it difficult for them to work together to achieve a common goal.

United States vice president Mike Pence accused China of trying to interfere with the midterm election to undermine Donald Trump’s trade policies with Beijing, and to beware of their “debt diplomacy”. Both sides have been at odds over human rights and global hegemony, with no resolution in sight. Predictions that China’s prosperity would cause it to fall in line with international values and law have proven to be false. Chinese president Xi Jinping has been accused of trying to overstep China’s bounds in order to become a world power. However, the comments made by the United States are only driving more of a wedge between the two countries. Both presidents are facing criticisms in their home counties, which does not help the tensions. No resolution to these tensions can be seen in the near future.

This article is significant because it shows an example of how modern day nationalism has driven a wedge between the two major powers: China and the United States. Their disagreements on policies shows the “us” versus “them” mentality described in Introducing Global Issues. Until they put their disagreements and criticisms aside, this nationalism will continue to be evident and conflict will continue.

The Associated Press’ article “Iran Votes to Join Pact to Combat Terror Financing” describes how the country made the “historic decision” to join the CFT. This is realevent to terrorism because it shows how Iran is taking steps to combat terrorism.

Iran has voted to join the CFT, or “Combating the Financing of Terrorism” convention. In order to become a law, this bill must be ratified by the Guardian Council. Joining this convention would require Iran to comply with ideas brought forth by an intergovernmental corporation called the Financial Action Task Force, which targets money laundering around the world. Opposers of the bill said it would erode the country’s sovereignty, while others saw it as a historic gesture that would make it easier to do business with China and Russia.

This story is significant because it shows how a country often associated with terrorism is taking actions to stop this issue.

In the article “Terrorist Threat ‘More Fluid and Complex than ever’, White House Says”, Mark Landler and Eric Schmitt describe the new counterterrorism strategy released by the White House. This is relevant to global security threats because it describes the extent to which terrorism is threatening countries, and the steps being taken (specifically in the United States) to stop it.

The White House released the first counterterrorism proposal since 2011. It vowed to fight “radical islamists” as well as Iran, while still embracing many of the principles of the Bush and Obama administrations. It said that terrorism is more widespread than ever before, and that the country has failed to mitigate the terrorist threat in the past. The plan was delayed by many months, as there was some internal disagreements on how the Trump administration should handle counterterrorism, and the use of the term “radical Islamic terrorism”. Policies set forth by this proposal include strengthened border security, more internet monitoring, cutting off financing and travel, and increased pressure on terrorist networks by government officials. It also emphazises the need for allied partners.

This article is significant because it describes major steps in counterterrorism efforts that have not been brought forth since 2011.

In 2009, industrialized nations pledged to donate $100 billion a year by 2020 to help poorer nations deal with climate change. Only $3.5 billion out of $10.3 billion promised has actually been given to the Green Climate Fund. A United Nations Climate change meeting in Bangkok will be followed by a Poland meeting in December, where countries will formulate rules to help carry out the Paris Agreement. The lack of funding discussed at the Bangkok meeting has made people pessimistic about the Poland meeting. The article states that political scientists are horrified by the United States position on this issue, as they have not given nearly was much as they promised under the Trump administration. Furthermore, there are disagreements on how much money is actually being spent to fight climate change in poorer countries. Critics of the Green Climate Fund feel that instead of money being funneled through large development banks, it should instead be given directly to the governments. The article ends by explaining how Southeast Asia is particularly vulnerable to climate change.

This article is significant because it highlights how not enough is being done by developed nations to assist the countries most vulnerable to climate change.